In an effort to cut down on the amount of sugar I eat, I'm trying to eat only desserts that are homemade. I felt like something to celebrate the new year so I made an appletorte using a recipe from Bittman's The Best Recipes in the World.

Apparently, it's a Scandinavian dish and the recommended apples are Cortland, Rome, Golden Delicious or McIntosh 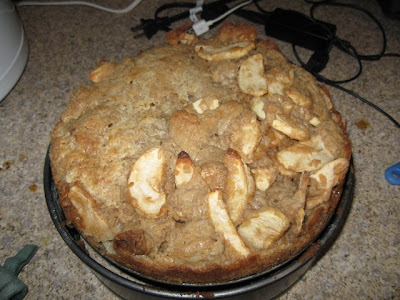 1. Preheat the oven to 350F. Combine the dry ingredients in a bowl. Use an electric mixer to cream the butter and sugar together, then add the eggs, one at a time, beating after each addition until the mixture is smooth. By hand, stir in the dry ingredients, stirring just to combine; do not beat. Stir in the apples.
2. Grease and four a 9- or 10-inch springform or tube pan and pour in the batter; sprinkle liberally with sugar. Bake until a toothpick inserted in the center comes out clean, 45 minutes or a little longer. Cool on a rack, then remove from the pan and serve with the ice cream or other topping.

As you can read, this recipe is pretty simple, but I had trouble mixing everything together. The butter-egg-sugar mixture gets thick and the dry ingredients didn't want to combine. I also had a hard time mixing the apple slices in well as you can see from the picture - most of the slices ended up on one side. In any case, I had a piece with Cool Whip and it was pretty darn good so I would definitely make it again.
It took about 55 minutes to cook for me.