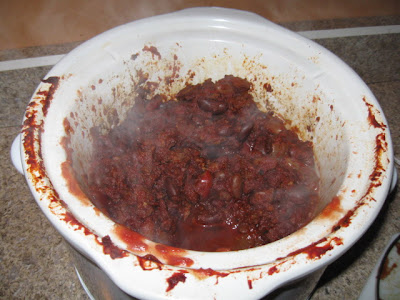 Today's slow cooker adventure was chili. I have a good chili recipe from my friend, but I thought I would give this one a try. Meh. It was ok, but nothing special. The recipe calls for tomato puree which I interpreted as tomato paste, but I think I should've used tomato sauce instead. I put plenty of spice in and ended up drinking a whole mess of water.

I served it over corn bread so the meal wasn't a total loss. It also counts as new recipe 73 towards my challenge. 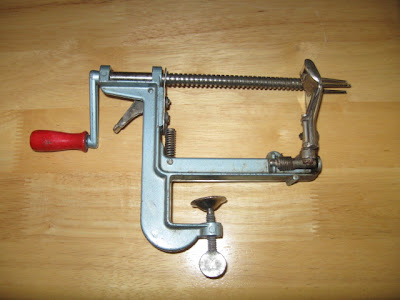 Earlier in the day I made some applesauce since New York grows pretty decent ones. My dad has an awesome recipe which calls for gravensteins, but those are hard to get out here so I used mcintosh and honeycrisp. I don't like peeling so I borrowed my colleague's old-timey apple peeler and corer.
You impale the apple and then a razor blade on a spring-loaded clip peels the apple as you rotate it. At least that's the theory.
It worked ok on the smaller apples and cores them well, but failed on the large honeycrisps. It's fast, but creates quite a bit of mess and doesn't seem to get the peel near the core at the top and bottom.

I haven't tried the applesauce yet, but I'm sure it's at least adequate.
Posted by Jeremy at 6:37 PM